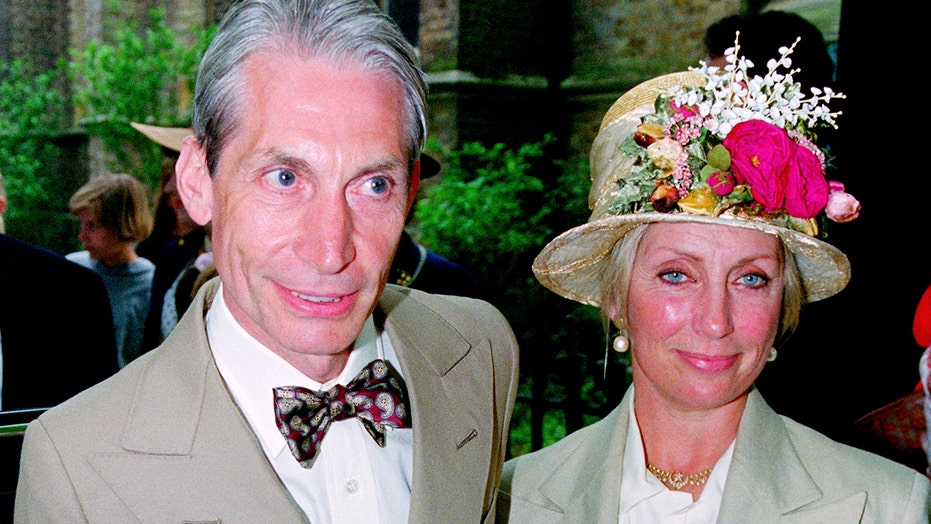 Rolling Stones drummer, Charlie Watts, died on Wednesday in London at age 80 – but despite his rock star status, Watts is said to have harbored one regret about his life in the limelight.

"The one regret I have of this life is that I was never home enough," Watts once said about his wife of nearly 60 years, Shirley Shepherd, according to Vulture. "But she always says when I come off tour that I am a nightmare and tells me to go back out."

The couple shared a daughter, Seraphina, along with a granddaughter named Charlotte and their love story is one worthy of its own Hollywood production.

Watts said in his book, "According to the Rolling Stones," that he initially was drawn to Shepherd in the early 1960s when they crossed paths as Watts was rehearsing with Alexis Korner’s band. "Two of the guys in the band, the piano player Keith Scott and Andy Hoogenboom, the bass player, were from Hornsey Art School, which is where Shirley was studying, and she came down with Andy and his wife," Watts explained, per People magazine.

Watts and Shepherd were married four years later and she began accompanying Watts on the road according to Chrissie Shrimpton, a former girlfriend of Mick Jagger, who was an editor on Watts’ autobiography.

HOW MUCH ARE THE ROLLING STONES WORTH?

"The firm rule was always 'no girls on tour' but Shirley would nearly always go because Charlie simply refused to get up or wash if she didn't," Shrimpton claimed in the Phillip Norman biography of Mick Jagger.

In Watts’ own account of Shepherd’s life and times traveling with the band, he wrote that she was an even bigger fan of the Rolling Stones than he ever was, adding that she often played their records while he typically refrained from doing so.

Drummer of The Rolling Stones, Charlie Watts and his wife Shirley Ann Shepherd, attend Georgia May Jagger's christening at Saint Andrew's church, Richmond in 1992.  Watts died on August 24 in London surrounded by his family. (Photo by Dave Hogan/Hulton Archive/Getty Images)

"My wife and daughter may come out on tour, but Shirley's always had other things outside of this band," he wrote in "According to the Rolling Stones," per People. "She's a great fan of the Stones, though. I'm not; it's what I do. Mick and Keith and Ronnie are my friends and the band is a very good one, but that's it. But Shirley actually plays our records. I don't."

He lauded the support he received from Shepherd in a 1996 interview with Rolling Stone, telling the publication that while he "always wanted to be a drummer," he would only do so for a living, "as long as it's comfortable with my wife."

During the Rolling Stone interview, Watts also opened up about his dealings with various substances and credited Shepherd with helping him kick his habit.

"I've said it myself, but people don't believe it. I nearly killed myself. At the end of two years on speed and heroin, I was very ill," Watts told Rolling Stone. "My daughter used to tell me I looked like Dracula. I just stopped cold – for me and for my wife. It was never me, really."

In a 2018 interview with NME, Watts — whose death brought an outpouring of remembrances from fans and other musicians — was asked about his secrets to a long and healthy marriage. The publication also addressed how having a strong relationship is rare for rock stars while partying and singing on the road.

"Because I’m not really a rock star," he said. "I don’t have all the trappings of that. Having said that, I do have four vintage cars and can’t drive the bloody things. I’ve never been interested in doing interviews or being seen."

"I love it and I do interviews because I want people to come and see the band. The Rolling Stones exist because people come to the shows," Watts continued. "There’s nothing worse than playing in a club with three people sitting in the front – one’s your girlfriend and the other’s your mate – and that’s the audience."

He also touched upon the idea of whether the Stones would ever retire.

"No. I’ve thought that the band might stop a lot of times. I used to think that at the end of every tour. I’d had enough of it – that was it," he replied. "But, no, not really. I hope [when it ends] that everyone says, ‘That’ll be it.’ I’d hate for it to be a bloody big argument. That would be a real sad moment."