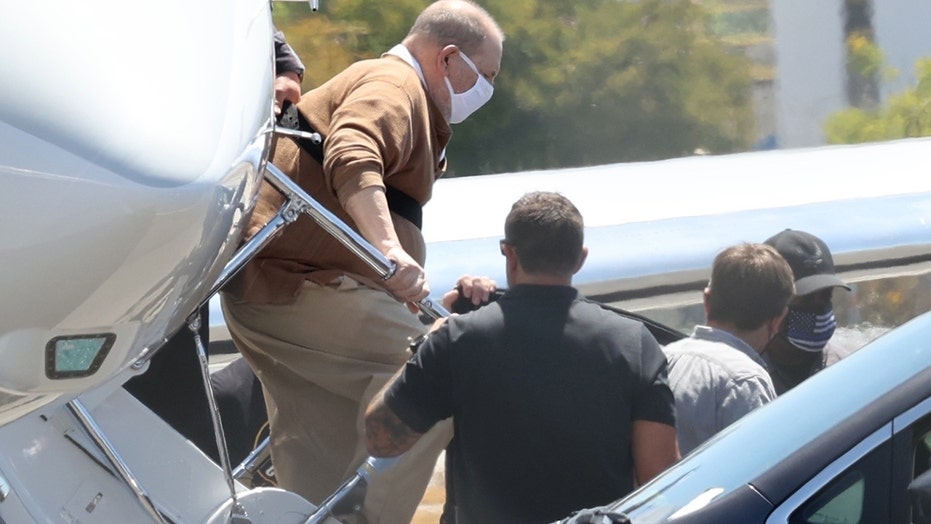 Convicted rapist Harvey Weinstein is officially on the ground in California after the plane that was carrying him landed at Hollywood Burbank Airport.

On Tuesday, an attorney for Weinstein, 69, confirmed to Fox News his extradition was expected to happen in mid-July so that he could stand trial for more sexual assault charges.

"This morning at approximately 9:25 custody of Mr. Harvey Weinstein was handed over to the appropriate officials for transport to the state of California per a court order," a spokesman for New York State Department of Corrections and Community Supervision told Fox News in a statement.

Weinstein's lawyer, Mark Werksman says he is "disappointed that the court didn't allow to give time for the court to rule on our habeas petition" and he will continue to fight to defend Weinstein.

The disgraced movie mogul, who is already serving a 23-year sentence in New York for rape and sexual assault, faces 11 counts in California, including rape and sexual battery involving five incidents that allegedly took place between 2004 and 2013. If convicted, he faces up to 140 years behind bars.

His defense team argued in a New York City court last month that the former Miramax head honcho should be able to stay in New York since he is currently receiving medical treatment and said Los Angeles prosecutors aren’t even ready to receive Weinstein as area courts have yet to begin jury selection.

They also pressed to the court that Weinstein's extradition paperwork was incorrectly completed and didn't correlate to what he was being charged with in Los Angeles, adding that the world is well aware Weinstein is serving 23 years to life in New York and if Los Angeles wants him to stand trial, it can happen virtually.

Meanwhile, prosecutors argued the adverse that Weinstein can receive treatment from anywhere and that the defense of medical treatment should hold no barring considering Los Angeles’ prowess as a world leader in administering top-notch medical treatments.

The indictment against Weinstein, filed in April, is virtually identical to the criminal complaint that had been filed in January 2020 by former DA Jackie Lacey.

LA prosecutors allege that Weinstein raped an Italian model at a Beverly Hills hotel on Feb. 18, 2013, just a day before an attack against another woman, Lauren Young. The alleged assaults of the other three women all took place at Beverly Hills hotels.

Regardless of how the California case ends, the former producer would still have to return to New York to serve the rest of his 23-year sentence.