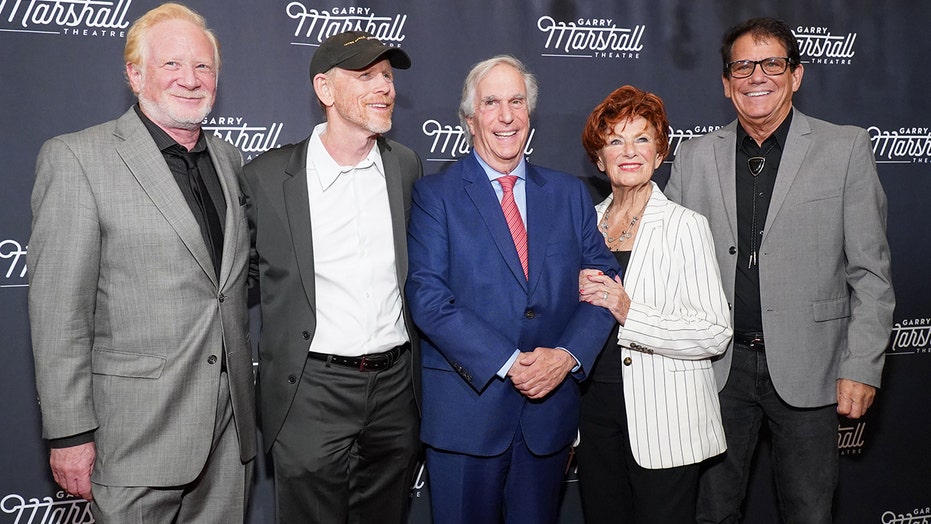 It was a family affair on Wednesday when the cast of “Happy Days” came together to honor the legacy of the legendary sitcom's creator, Garry Marshall.

Marshall, who served as executive producer and showrunner of the 1950s comedy series and its various spinoffs, was honored Wednesday alongside cast members including Ron Howard, Henry Winkler, Don Most, Anson Williams and Marlon Ross.

The cast attended an annual gala to support Marshall’s 130-seat theater in Burbank, Calif.  Marshall founded the Burbank landmark in 1997 when it was called the Falcon. It was recognized as the Garry Marshall Theater in 2017.

From left, Don Most, Ron Howard, Henry Winkler, Marion Ross and Anson Williams at an annual gala this week in California. (Photo by Rachel Luna/Getty Images)

The castmates took a sentimental trip down Memory Lane and chatted about their time with the classic sitcom, recalling time spent on the Paramount lot with Marshall, who died in July 2016.

According to Entertainment Weekly, Howard, 65, opened up about a chance encounter with Marshall that led to an audition for a “Love, American Style” spinoff that Howard said “kept me out of the f---ing jungle” during the Vietnam War.

The same meeting also led to Howard’s break as a director.

“You can’t take these things for granted,” said Howard. “We’re here in Garry’s name and yet I’m experiencing a connecting of the dots of an entire story.”

Winkler recalled coming to Los Angeles from New York, having studied drama at Yale, to audition for the role of the Fonz. “They wanted a tall Italian and they got a short Jew,” Winkler joked. The 74-year-old was nominated for an Emmy three times for “Happy Days” and eventually won two as a co-star opposite Bill Hader in the HBO series “Barry.”

Ross, for her part, quipped that “I’m 90-f---ing-1,” before expressing her appreciation for her fellow co-stars.

Erin Moran, left, and Marion Ross from "Happy Days" arrive for "A Father's Day Salute to TV Dads" hosted by the Academy of Television Arts and Sciences in Los Angeles, June 18, 2009. (REUTERS/Fred Prouser)

“You never saw two guys who filled the top spot so beautifully [than Howard and Winkler],” she said. “I’m proud to be their mother.”

Most was in his junior year at Lehigh University when he auditioned for “Happy Days,” according to the outlet, and the 66-year-old said of his time on the show, “we were so good at what we did because we respected each other and loved each other."

He added, "We made it look easy and it wasn’t.”

HOW HENRY WINKLER TRANSFORMED PRIVATE BATTLE WITH DYSLEXIA INTO COMEDY

Williams, 70, simply said he was grateful that Marshall often encouraged him to explore other opportunities in show business, which led to work as a director of episodic television.

“Marshall said, ‘You may not be actors all your life, especially you, Anson,” said Williams. “He actually said that. ... He gave us an amazing break. He gave us a life.”