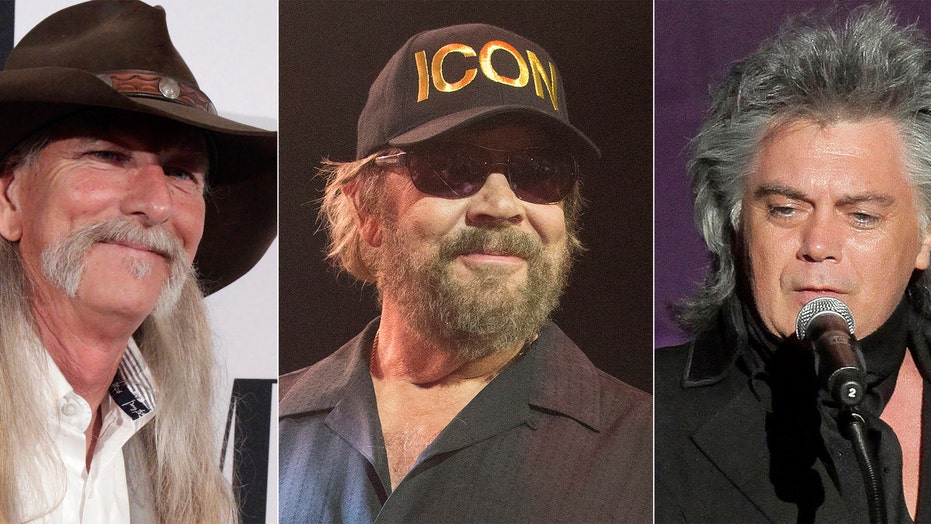 The Country Music Hall of Fame has three new inductees.

The Country Music Association announced on Wednesday that Hank Williams Jr., Marty Stuart, and songwriter Dean Dillon have all been bestowed with the prestigious honor.

Williams, who often is referred to as Hank Jr. or the nickname Bocephus, will join his father, country legend Hank Williams Sr., in the Hall of Fame's rotunda.

“Bocephus has been eyeing this one for awhile. It’s a bright spot during a difficult year,” said Williams in a statement. Williams' 27-year-old daughter Katherine died in a car accident in June.

“I have been making Top 10 records for 56 years," said Williams, 71. "I fell off a mountain and tried to reinvent myself as a truly individual artist and one who stepped out of the shadows of a very famous man... one of the greatest. I’ve got to thank all those rowdy friends who, year after year, still show up for me. It’s an honor to carry on this family tradition. It is much appreciated.”

From left: songwriter Dean Dillon, singer Hank Williams, Jr., and singer Marty Stuart, who are the newest inductees to the Country Music Hall of Fame. (AP)

Williams is known for his songs like “A Country Boy Can Survive,” “Family Tradition" and “All My Rowdy Friends Are Comin' Over Tonight,” which later became the opening theme song for “Monday Night Football." He has had 10 No. 1 Billboard Hot Country songs with his first one coming at the age of 21 in 1970.

While Williams' influence on country music has been undeniable, his absence from the Hall of Fame in previous years was widely considered a snub based on his outspoken politics. Williams has been a vocal critic of former President Barack Obama, falsely calling him a “Muslim president" from the stage and comparing a golf outing between Obama and John Boehner to Hitler playing golf with Benjamin Netanyahu. As a result, ESPN pulled his song from “Monday Night Football,” although it has since returned.

He won entertainer of the year at the CMA Awards twice, in 1987 and 1988, and three times at the Academy of Country Music Awards between 1986 and 1988. In 1989, he won CMA vocal event of the year for “There’s a Tear in My Beer,” a virtual duet with his late father, which also earned him a Grammy for best country vocal collaboration.

Stuart, a five-time Grammy winner, started his career as a sideman playing in bands led by bluegrass legend Lester Flatt and Johnny Cash before starting his own artist career in the 1980s. Stuart charted six top 10 Billboard Country songs, mostly during the 1990s, with songs like “Hillbilly Rock," “Little Things” and “Tempted.”

“It is the ultimate honor in country music,” said Stuart, 61, in a statement. “I’m so honored to be included in this class and I’m honored to be included alongside Hank Jr. and Dean Dillon. I love those people. To be officially inducted into the Country Music Hall of Fame is beyond words. I’m usually not at a loss for words.”

He has won Grammys for his collaborations with Asleep at the Wheel, Earl Scruggs and Travis Tritt, including their well-known duet “The Whiskey Ain't Workin.'” Stuart is also a photographer, a producer and an archivist of country music history, with plans to open a museum in his hometown of Philadelphia, Mississippi.

Dillon is known for being the tunesmith behind George Strait's dozens of hits, including “The Chair," “Ocean Front Property” and “Here For a Good Time." With Linda Hargrove, he also wrote the timeless classic “Tennessee Whiskey," which has been covered by David Allan Coe, George Jones and Chris Stapleton, who turned it into a seven-time platinum hit.

Other hits he co-wrote include Kenny Chesney's “A Lot of Things Different” and “I’m Alive,” as well as Toby Keith’s “A Little Too Late” and “Get My Drink On."

“I was just speechless,” said Dillon, 65, in a statement. “Trying to soak in the words that I had just heard. My life flashed before my eyes. You could’ve knocked me over with a feather.”