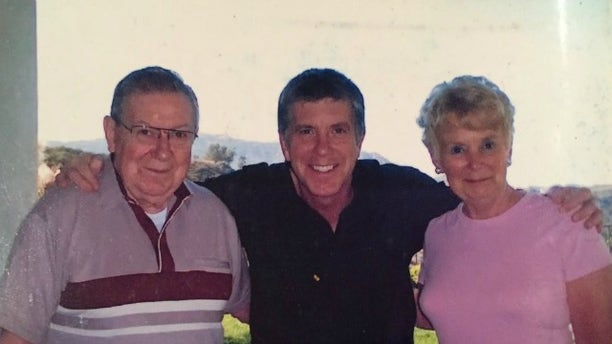 "Four months apart. Together forever. #RIPMom," the "Dancing With The Stars" host captioned an older photo of himself with both of his parents.

WATCH: Tom Bergeron Pays an Emotional Tribute to His Late Father on 'DWTS'

One day earlier, the 60-year-old TV personality tweeted that family had gathered at his mother's bedside. "4 months ago my Mom lost the love of her life. Now we've gathered at her bedside. They never did like being apart," he wrote.

Celebrity pals including Elizabeth Berkley and Maria Menounos tweeted their condolences after they heard the news.

The support and well wishes were appreciated by Bergeron, who tweeted his gratitude. "Social media is often damned for exposing our basest instincts. Your tweets about my mom's death show a healing connection is also possible!"

Bergeron confirmed that he will miss a scheduled appearance on "Good Morning America" on Tuesday to attend his mother's funeral services but will be back to work on March 21.

NEWS: Edyta Sliwinska Returning for 'Dancing With the Stars' Season 22

Bergeron's father, Raymond Bergeron, died in October, and the "DWTS" host honored him in an episode of the dancing competition show. "I want to take a moment to say that my dad loved this show," Bergeron said during the show's closing credits. "Never missed an episode. And I'd like to think somewhere that he didn't miss this one."