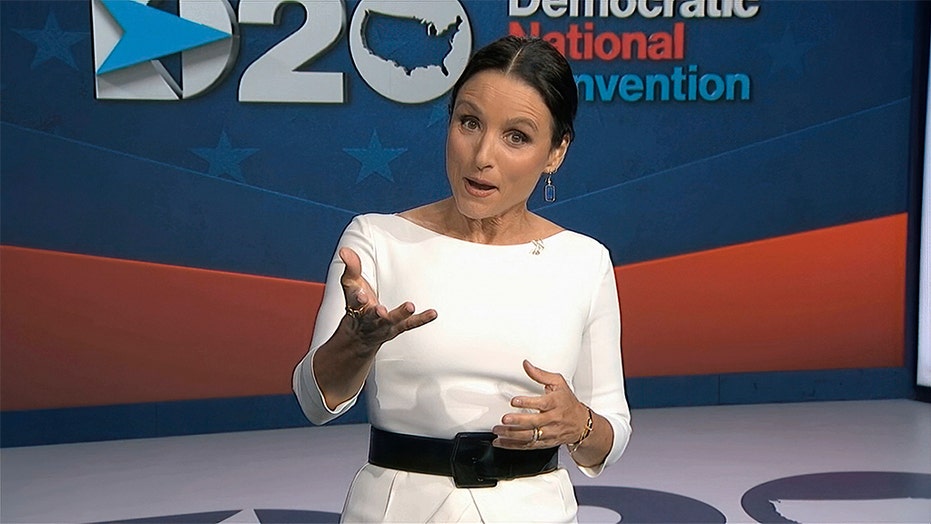 Actress Julia Louis-Dreyfus kicks off the final night of the Democratic National Convention.

Who better to host the final evening of the Democratic National Convention than former "Veep" star Julia Louis-Dreyfus as Joe Biden accepts the party's nomination for the presidential ticket.

The Emmy-winning actress has been known for her comedic chops for decades, having also starred in "Seinfeld" and "Saturday Night Live" before taking on the role of the fictional Vice President Selina Meyer in the HBO hit comedy.

Right out of the gate, Louis-Dreyfus, 59, made a joke about adding a fifth night to the days-long event.

"These last few nights have been going so well we've decided to add a fifth night where we will just play Michelle Obama's speech on a loop," she said in reference to the former first lady's popular speech earlier in the week.

"I cannot wait to see [Harris] debate our current Vice President, 'Meeka Pints.' Or is it 'Paints'?" she said in reference to constant mispronunciation of Harris' name.

The actress joked that the name sounded "foreign" before Yang called it "not very American sounding."

Not long after, she referenced Biden's faith.

"Just remember. Joe Biden goes to church so regularly that he doesn't even need tear gas and a bunch of federalized troops to help him get there," she said.

Later, she said she planned to "vote by mail" in the same manner of "Vice President 'Poontz' and President Trump himself," in reference to the tension over mail-in ballots.

As the other celebrity emcees have done, the former "Seinfeld" urger viewers to text the number 30330.

"That would be the president's golf score if he didn't cheat," she cracked.

She admitted that the joke was "a little nasty," but then expressed pride in being "a nasty, nasty woman."

Julia Louis-Dreyfus is one of the Emmy-winningest actors in television history. (AP)

As the night drew on, Louis-Dreyfus referenced the president's Twitter habits, and said she expected to be called "a washed-up horse-face no-talent has-been with low ratings."

"Well, with all due respect sir, it takes one to know one."

The actress then admitted to crying when Biden reached out to her after her cancer diagnosis, then said, "our current president has made me cry, too. But it's never had anything to do with his warmth or kindness."