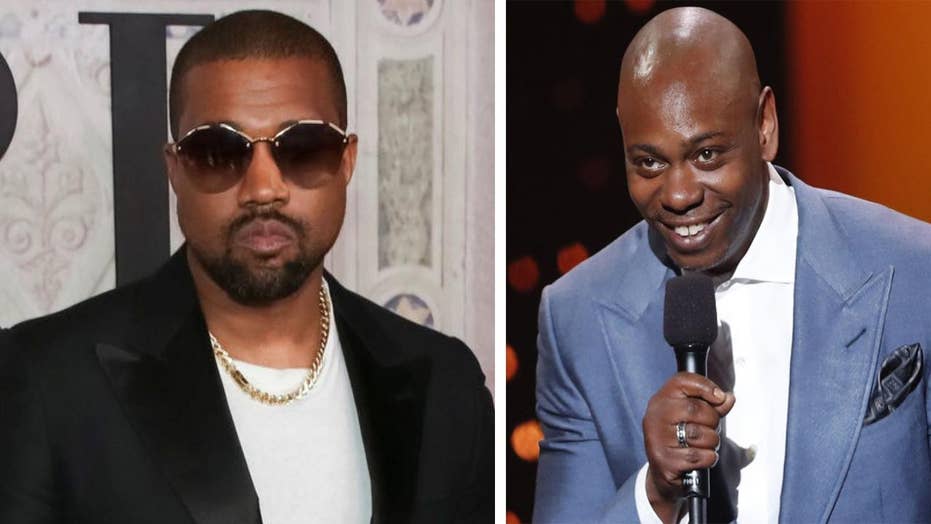 Kanye West received a much-welcomed visit from his pal comedian, Dave Chappelle, who “checked” on the rapper at his ranch in Wyoming.

Following a flurry of tweets issued by West on Monday after his South Carolina campaign rally, the 42-year-old mogul and fashion designer issued a big thanks to Chappelle, who jumped on a plane to Wyoming to make sure his buddy was OK.

"THANK YOU DAVE FOR HOPPING ON A JET TO COME SEE ME DOING WELL DAVE YOU ARE A GOD SEND AND A TRUE FRIEND ALL LOVE," the “Jesus Walks” performer wrote alongside a video of himself with Chappelle and a few other men.

WHAT IS KANYE WEST'S NET WORTH?

In the video, West egged Chappelle, 46, to "please just make us smile, the world needs some, we need some joy, we need to smile."

"We need some joke, something. Something to like lift our spirits," added West, eliciting a response from Chappelle: "S---, I don’t know, I’m still on my first cup of coffee. Let me think of a good joke.”

The “Sticks and Stones” stand-up performer bantered with the newest Gap fashion partner: "An uplifting joke? You know I don’t do them."

"Ah, that was it!" West fired back in approval.

West and Chappelle then share an embrace and the Yeezy founder thanked the funnyman for “coming out and checking on me.”

The rapper, who has been flirting with a presidential run as an independent candidte, went on a Twitter rant Monday night and issued a diatribe in some tweets -- that have since been deleted -- where he appeared to reach out to his mother-in-law, Kris Jenner, mentioned his marriage with Kim Kardashian and said he feels that he could end up getting “locked up like Mandela,” an apparent reference to Nelson Mandela.

KANYE WEST POSTS BIZARRE TWITTER RANT: ‘KIM TRIED TO BRING A DOCTOR TO LOCK ME UP’

He also wrote: "Kim was trying to fly to Wyoming with a doctor to lock me up like on the movie ‘Get Out’ because I cried about saving my daughters life yesterday."

"Everybody knows the movie get out is about me,” he added in an additional tweet.

Rapper Kanye West got emotional as he held his first rally in support of his presidential bid on July 19, 2020, in North Charleston, S.C. U.S.REUTERS/Randall Hill

Reports indicate that Kardashian, 39, is "furious" at West after he claimed during his campaign rally that the couple considered terminating Kardashian's first pregnancy, which eventually resulted in their daughter North.

"Kim is shocked that Kanye spoke about North at the rally," an insider told People magazine on Monday of West's remarks during his first campaign rally in South Carolina over the weekend. The couple also shares three other children: sons Saint, 4, and Psalm, 1, and daughter Chicago, 2.