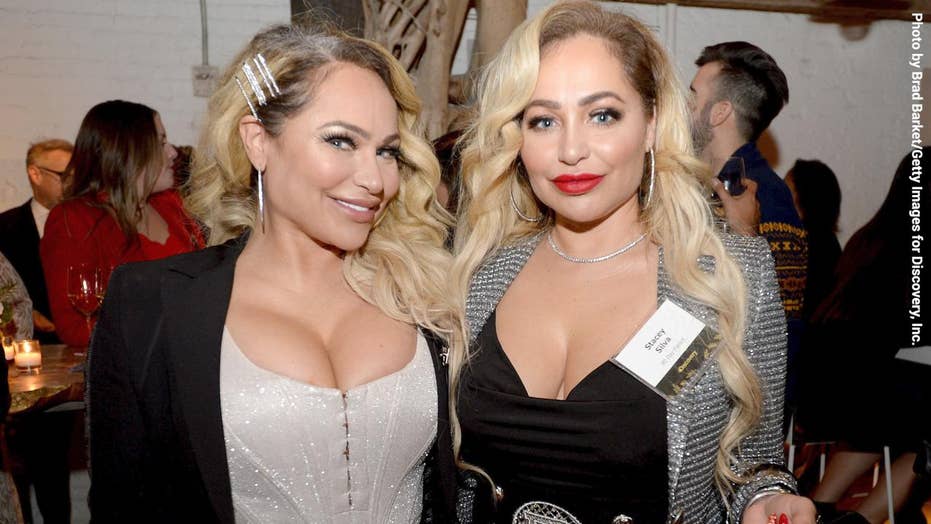 '90 Day Fiancé' stars and sisters Darcey and Stacey Silva talk about their TLC show ‘Darcey &amp; Stacey,' plus they spill on their dating lives.

EXCLUSIVE: Fans of “90 Day Fiancé” are in for a treat.

“Before the 90 Days” star Darcey Silva and her jet-setting companion and twin sister, Stacey Silva -- two fan favorites from the franchise -- are branching out on their own after viewers stayed glued to the wildly entertaining long-distance love life of Darcey while devoted Stacey kept her sister from emotional turmoil.

Notorious for living their lives loud and fabulous, the Silva sisters, both 45, have made a name for themselves in the world of fashion and entertainment.

The pair spoke with Fox News about their foray into becoming reality TV headliners on “Darcey & Stacey,” an all-new series that will showcase them as fans have never seen before. Both mothers of two children – Darcey with her teenage daughters and Stacey with her teen sons – the wild ride will see the twins in a completely new element on their home soil of Middletown, Conn.

“Growing up, we did travel all over the world since the age of 3 – in London, Japan, Singapore,” said Darcey. “We went to school there. And we've lived in a lot of places all over the U.S. as well. But Connecticut is where our roots are and it's always going to be home for us.”

In Connecticut, Darcey is picking up the pieces after another failed relationship – this time with British ex-boyfriend Tom. Meanwhile, following a five-year engagement to Albanian fiancé Florian Sukaj, Stacey and her easy-on-the-eyes hunk have finally been approved for the K-1 Visa.

The pair will have 90 days to get married once Florian arrives in the States, but Darcey has lingering doubts about his commitment to Stacey after photos of him with another woman surfaced online, inciting rumors that he was allegedly unfaithful.

This season, the sisters are more determined than ever to stick their landing on love and stability. Here’s everything you need to know about their next reality chapter.

Fox News: Did you two anticipate so many years ago that one day you would have your own series?

Darcey: It wasn't anticipated. I think we just always visualized what we wanted in life and we've always stayed strong, empowered and really honed in deep down inside what we truly wanted in life. And, you know, we've always kind of dabbled in the industry from fashion to things in entertainment. I think it's just in our blood and we're very blessed to have gotten this opportunity. So, you know, with B-90 ('Before the 90 Days') that was an amazing experience as well because it got to show relationships and with this show, it kind of dives more deep into who we are as twins, sisters, moms and life and family as well as our relationships. So it's been an experience and I'm very grateful for it. So, it's a blessing in disguise.

Fox News: Have you two thought about going the other way on the dating spectrum?

Darcey: Right. No, that makes total sense. And, you know, Stacey and I have had a long life, we've had a lot of relationships. We were married. You know, we got divorced, obviously -- it was on the same day. But when we moved to L.A. many years ago -- we've lived there for about eight years -- and we've had multiple relationships on and off. And I tried dating in a different way at that time. So it was a fun experience but I learned what I don't want, you know? And now that we're back home in Connecticut, you know, we're moms first and foremost -- and I just truly believe that Stacey and I deserve our soulmates and the people that we desire and visualize for ourselves and are deserving of that. So sometimes it takes us to dive deep and try to find the right one. It's a lot of fish in the sea, but I've been diving deep to find mine but I'm happy to experience all that, nonetheless.

Darcey: It's not every day that you have a connection with somebody and when you do find it, you want to go with it and just go with your heart, and that's just the type of people we are, we go with our heart. Yeah, we're very open and very real and give a lot of ourselves openly, honestly. And sometimes you get hurt through those experiences, but there's a lot of blessings that come along with it when we find the right one. And I feel like we're young at heart so we tend to kind of attract the younger guys, which isn't so bad. So we're loving and living life. And you guys will get to experience our journey along with us.

Stacey & Darcey: We’re very emotional women and as twins, we feel each other's energy. I guess that's the 'twin-tuition' in us in a sense. So if she's going through something, I feel it and if I'm going through something, which she's experienced a lot of -- she feels it too. That's why it's like ding, ding, ding -- 'Hello? Red flag, Darce.' Or I'm like, 'Stace -- hello? Wake up. You know, I know what you're feeling.' But we'll always have each other's back in the end and know that we're both deserving of great love.

Fox News: Has there been a moment for either of you where you've gone against the intuition of your sister?

Stacey: Well, we all know about Darcey's past and her last two relationships were toxic and didn't go so well. And I always had an intuition or 'twin-tuition,' especially the last two. And I always felt it wasn't right and it was wrong. And I voiced my concern many times and, you know, I really think Darcey had to experience that for herself. And she grew from that experience.

Darcey: Yeah, I've definitely let the past go. I peeled from that and now I feel like I can kind of say what I want in a relationship and not feel like I'm walking on eggshells or just pleasing -- I'm a 'yes' person a lot of the times and being at my age and dating someone younger than me, it's like I feel like I shouldn't have a relationship where I like there's control or manipulation. I don't want that, it's too toxic for me and I've [risen] above. Yeah, I was emotionally invested in those relationships at the time and now I know what I'm deserving of and I'm not going to settle for anything less.

Stacey: And we're both givers, so I feel like sometimes that bites us in the butt. Yeah. So we'll definitely be listening to each other a lot more sometimes because we're invested in it, we don't want to hear it. But when you have that feeling. Yeah. It means something.

Fox News: How many methods of dating have you tried?

Darcey: Well, it's really ironic, because when we're younger, obviously, you know, we were married and in relationships and those relationships started with actually knowing the person first hand, you know, being there in person. It wasn't like just a dating app, it wasn't long distance. So you got to know the person starting as a friend and you work your way up into something special. Obviously, those didn't work out. But, you know, we respect our exes because they're the fathers of our kids. And, you know, no one's going to L.A. You know, I tried the dating apps or friends of friends who want to introduce me to somebody. I kind of dabbled in it all. The blind date really didn't really work for me. I remember doing one and it was just like, 'No.' I was ready to get out of there fast. But if you feel you can build a connection with someone online -- great. I'm the type person that goes with the flow with that and I'm not scared to do that.

Stacey: I think for me, I think this is my first international long-distance relationship and you'll see what happens in my journey.

Darcey: Social media has been a great outlet too. You know, you meet a lot of people that way and that's how she met Florian. So you can connect in many multiple ways and I don't think we feared that at the time? Yeah. So it was intriguing. It was something new and fresh.

Fox News: Have either of you experienced any catfish situations?

Darcey: I wouldn't say a catfish. I would just say, is this person really who they are? I mean, physically they [are] and I know in the past with one of my exes, he thought I catfished him. It was like he FaceTimed me all the time. He knew who I was, saw all parts of me. And, you know, for him to kind of squander and say, 'Oh, she's not who she is,' it was a bunch of BS. So I started questioning him like, well, obviously, I don't think he's the person that he says he is. Because I'm a woman that when people kind of hide back a little bit or not open up as much -- ehhh, something is not right there.

Fox News: Are you surprised when people are taken aback at the fact you have two daughters?

Darcey: Right, I think a lot of people are surprised that I have kids. Actually, Stacey has two sons as well -- we tend to do things in tandem. We got married around the same time, had kids around the same time, we got divorced on the same day. But with our kids, we protect them. They're our lives, we put them first. And with my girls, they've been a part of this journey for four years. They're very smart and beautiful inside and out. They have a very levelheaded, good head on their shoulders and I let them voice their opinion. They're very strong-willed and I love them with all my heart. And our dynamic as mom and daughters is very strong. And we love to do fun things together, just like Stacey does with her boys. You know, we're a very happy family and a strong unit altogether, and the kids are growing up altogether. So, you know, you'll get to see how strong and hard we are as moms as well.

Fox News: What kind of message do you want to portray for viewers?

Darcey: I feel like as moms, you know, we have to stay confident, empowered for ourselves and for our kids. You know, that's the only way we should be. And we want to be that way because they look up to us. So we never want them to get in a toxic relationship, we just want them to know that in life, stay strong, love yourself first and foremost, and stay positive. You know, anything that they've seen you go through, I think we've all learned as a family together and rose above.

Fox News: What can the audience expect that they might not anticipate?

Stacey & Darcey: I think a lot of people will see us go through our ups and downs, maybe a little bit of the good, the bad, the ugly. They'll get to really [dive] deep [into] who we are as individuals and twins, more of our life and our personal relationships and staying strong throughout it all. There's a lot of fun times, funny times. A little comedic. It's just the best of both worlds, really. And I think it's very relatable to viewers. And you'll get a sense of who we are. And hopefully, it's inspiring to them all.