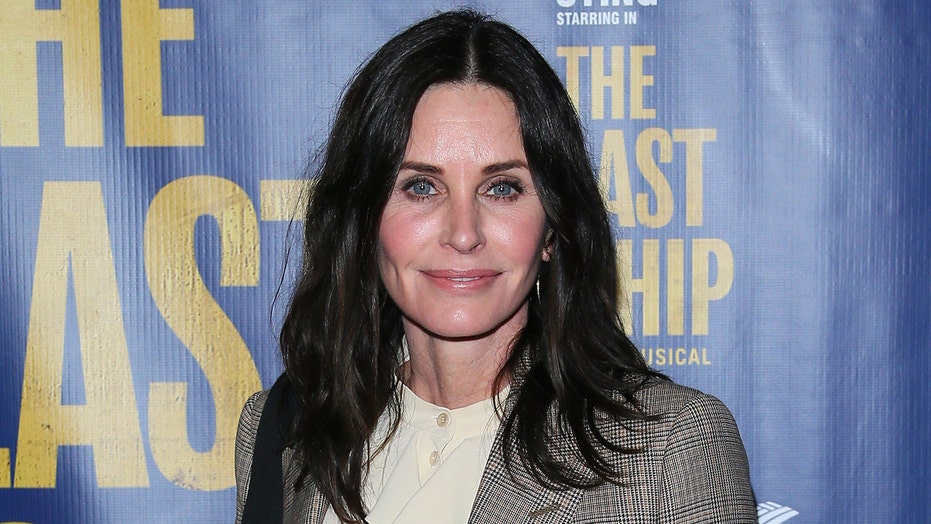 Courteney Cox shared a behind-the-scenes video on Instagram to reveal just how she pulled off the recreation of a scene from her most iconic role.

In celebration of Thanksgiving this year, Cox shared a video of herself dancing to the "Friends" theme song, wearing a raw turkey on her head with a pair of large sunglasses.

The 56-year-old actress is, of course, best known for playing Monica on the megahit sitcom "Friends" from 1994 to 2004, and in that decade, starred in a number of scenes that have remained a staple of pop culture to this day. And every year for Thanksgiving, one scene in particular floats around social media from an episode from the show's fifth season when Monica puts an uncooked turkey on her head with a fez and a pair of over-sized sunglasses, and shimmies in Chandler's kitchen.

Courteney Cox Courteney Cox shared a behind-the-scenes video revealing how she recreated the iconic 'Friends' scene in which she wore a turkey on her head. (Photo by Jean Baptiste Lacroix/Getty Images)

On Sunday, the star captioned the behind the scenes post of the stunt: "The (gross) truth!"
The video recreating the scene kicks off to a titled card reading, "Vegan Discretion Advised" before Cox, with her head wrapped in plastic and towels, splits the legs of a raw turkey.

"Really f-----g gross," she said in the clip as she then tried to slip the uncooked poultry over her head.

"That bone hurts," she added while struggling to place the bird. "It really hurts."

She also called the ordeal "so disgusting" before showing more of the struggles to complete her turkey day outfit.

The final shot of the clip shows a turkey roasting in the oven.

The video also attracted the attention of Cox's "Friends" co-star Lisa Kudrow, who added a comment.

"What did you DO?!" wrote the actress. "You are TOUGH AND GENEROUS."