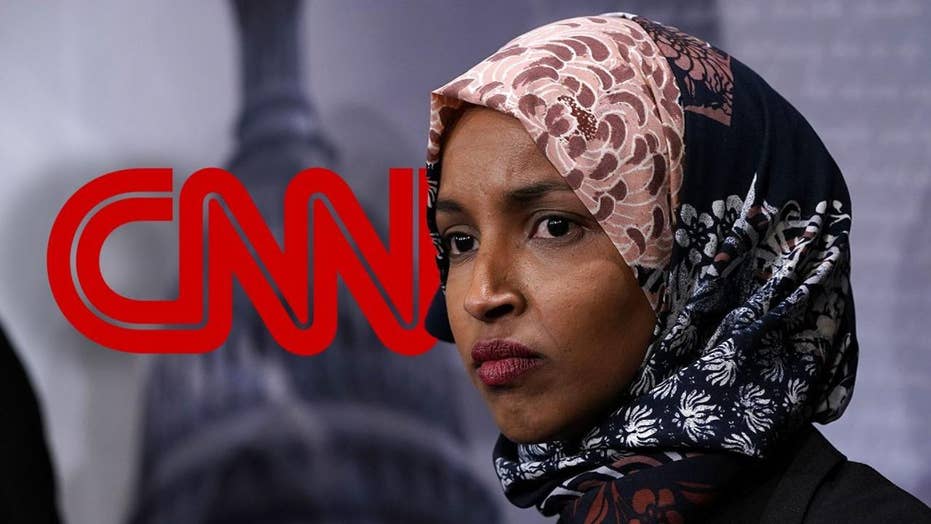 CNN is using Ilhan Omar’s anti-Semitic controversy to attack President Trump, according to the GOP.

CNN has managed to use controversy surrounding Rep. Ilhan Omar, D-Minn., who apologized Monday for anti-Semitic comments, as the latest impetus to attack President Trump and other Republicans -- raising eyebrows among media watchdogs.

Omar drew condemnation from members of both parties when she implied Sunday that the American Israel Public Affairs Committee (AIPAC), has been paying members of Congress to support Israel. House Speaker Nancy Pelosi, D-Calif., even condemned the remarks, while Trump told reporters Omar “should be ashamed of herself.”

But CNN’s coverage is the latest example of why Cornell Law School professor William A. Jacobson told Fox News that it’s time for Jeff Zucker’s network to acknowledge it has a far-left agenda and is essentially implemented anti-Trump programming.

“CNN should just admit its news division, not just its opinion commentators, hate Trump and want him gone.”

“CNN Tonight” host Don Lemon mentioned that Trump has called for Omar to resign over her hateful rhetoric before reviewing a laundry list of Trump’s past controversial remarks – even using the uncensored “s----hole countries” line in the process.” Lemon’s point was that if Omar is hateful, well, so is Trump and therefore it is “stunning” the president weighed in on the controversy surrounding the freshman House Democrat.

NewsBusters Managing Editor Curtis Houck told Fox News that CNN’s “anti-Trump obsession definitely shows on stories like this, that have nothing to do with him” until its hosts and reporters find a way to make it about him.

“A House Democrat has repeatedly tweeted things that are anti-Semitic. Period. It shouldn't be that hard for CNN to report on this, but they've instead tried to assist Omar by muddying the waters in mentioning her plus Trump and, in this story, Steve King and Kevin McCarthy,” Houck said.

CNN anchor Chris Cuomo also put on a whataboutism clinic on Tuesday night when he compared Omar’s anti-Semitic comments to past rhetoric uttered by Trump. He criticized Omar’s tweets and called the question whether House Democrats should do more to punish the freshman congresswoman a “legit question.” Cuomo then pivoted, making the argument about Trump instead of simply focusing on Omar.

“He’s calling for Omar to get out and that is interesting,” Cuomo said before playing a clip of Trump’s speech to the Republican Jewish Coalition in 2015, when he told them he didn’t want their money and therefore didn’t expect their support.

“Now why is it different? Is it because Omar is a Muslim and wears a hijab? I hear a lot of that and it’s not right,” Cuomo said. “Especially when you remember that this president has been down the road of intolerance more than most.”

Cuomo then said Trump’s “selective outrage is transparent,” which happens to be exactly how many media watchdogs feel about CNN -- the network once known for Ted Turner's bare bones "just-the-facts" approach to journalism.

“The Rubin Report” host Dave Rubin noticed the way CNN tweeted stories regarding Omar and Donald Trump Jr., as the president’s son was flatly accused of making light of genocide against Native Americans while mocking Sen. Elizabeth Warren, but Omar’s rhetoric was simply “criticized as anti-Semitic,” according to the network.

Earlier in the week, CNN’s Jim Sciutto pondered if “the Republican Party has been sufficiently vigilant in policing bigotry within its own ranks” during a discussion about Omar. CNN’s John King used Omar’s remarks to remind viewers that House Minority Leader Kevin McCarthy once deleted a tweet that said Republicans can’t allow Michael Bloomberg, George Soros, and Tom Steyer to buy the election.

“As he now says there’s anti-Semitism on the Democratic side, he faced this himself not that long ago, so he should be careful how high he jumps up on the box,” King said of McCarthy.

“Called anti-Semitic? As a reminder, the Minnesota Democrat used an old trope, saying that Jews were buying lawmakers and ‘all about the Benjamins, baby.’ This is the same woman who once called Israel ‘evil,’” Whitlock wrote.

Before Omar apologized, CNN softened the comments with a headline, “Omar says it's 'exciting' her controversial views on Israel are sparking debate,” which resulted in NewsBusters accusing the network of rushing to her defense.

On Wednesday morning, the what-about-Trump theme continued when “New Day” host John Berman said that the president criticizing Omar is an “example of the pot calling the kettle anti-Semite.”

“Well, we had a few days where the media had to allow Democrats to look bad. Now, CNN hits the reset button and tries to make every bad thing Democrats do turn into a hit job on… Trump,” Media Research Center Vice President Dan Gainor told Fox News. “Every scandal is an anti-Trump scandal sooner or later.”

Fox News’ Joseph A. Wulfsohn and Samuel Chamberlain contributed to this report.