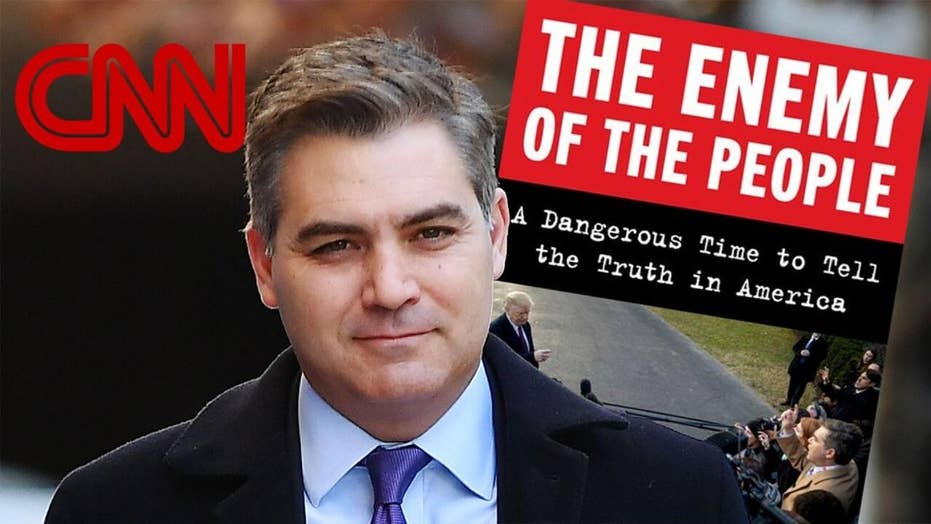 CNN White House correspondent Jim Acosta’s upcoming book has raised eyebrows both inside and outside of the network’s newsroom. The outspoken Acosta is being criticized by insiders and academics alike for further blurring the line between being an unbiased reporter, or a commentator "pushing his personal perspectives."

Acosta’s book, “The Enemy of the People: A Dangerous Time to Tell the Truth in America,” comes out June 11 and publisher Harper Collins has placed a strict embargo on its content. While the book will be kept under wraps until the publication date, a quick glance at the official description leaves little doubt that it will paint the president in a negative light.

The book is billed as “an explosive, first-hand account of the dangers [Acosta] faces reporting on the current White House while fighting on the front lines in President Trump’s war on truth” as “public enemy number one.” The description coincides with the feeling that Acosta is a grandstander who has built an empire as CNN’s in-house thorn in Trump’s side. Last week, he was accused of being dishonest while covering Trump's immigration overhaul remarks.

One current CNN employee told Fox News that threats to the free press should obviously be taken seriously and reporters need to seek the truth and report it – but Acosta may no longer be right for the job.

“Jim Acosta is, a lot of times, asking the right questions but it doesn’t always need to be about him and his grandstanding."

“The Enemy of the People: A Dangerous Time to Tell the Truth in America,” comes out June 11.

The CNNer said Acosta’s actions have resulted in some “eye rolling” around CNN, but the temperamental correspondent’s colleagues haven’t thought too much about the upcoming book.

A reporter who covers the White House for a different news organization echoed those sentiments.

"I support reporters — even irredeemably biased ones — having access to the White House. But Acosta should consider how his behavior affects the rest of the press corps, who are there to be taken seriously and report the news rather than to boost their own celebrity," the journalist told Fox News on the condition of anonymity.

Frustrated reporters aren’t the only ones concerned about the idea of a White House reporter writing a book about a sitting president, as some in academia also have an issue with it.

“It would behoove CNN to remove Acosta as a beat reporter from the White House and instead simply label him as a commentator or analyst,” DePauw University professor and media critic Jeffrey McCall told Fox News. “He could still frequent the White House press facilities and do his commentary from the White House, but another correspondent should now provide the day-to-day news updates on White House goings-on.”

“In a better world, someone with Acosta's bias wouldn't be on a White House beat, but these are not better times."

“In a better world, someone with Acosta's bias wouldn't be on a White House beat, but these are not better times,” Jacobson said. “Too many in the mainstream media view themselves as part of the resistance to Trump."

University of North Carolina media ethics guru Lois Boynton feels the book puts CNN “in a bit of a pickle” because Acosta’s first-hand experience makes for an interesting narrative but “likely creates a conflict of interest,” too.

“At the very minimum he and CNN must consider the perceptions that viewers will have about his dual role and how much weight they give those perceptions,” Boynton told Fox News. “At the end of the day, it’s what the viewers believe that matters. I can do everything by the objectivity book, but it’s the news consumers who get the final call.”

McCall added that there is a role for antagonistic journalism within the bounds of a free press protected by the First Amendment, and Acosta “has observed much and now has much to say” because of his perch as the network’s top White House correspondent.

“The big question now for CNN is whether Acosta has finally crossed the threshold from being a reporter who is supposed to provide measured and impartial news coverage of the White House into the role of a commentator who is pushing his personal perspectives. A good number of people likely think Acosta had already crossed that line, but this book would seem to cement his role as commentator over simply reporting,” McCall said.

Acosta has emerged as a hero among progressives for attacking Trump and members of his administration when they’re available to the press. He has been praised by liberal comedians such as Jimmy Kimmel, and even appeared on Netflix political drama “House of Cards.”

Harper Collins declined comment when asked if Acosta had promotional appearances lined up to coincide with the release of his book.

Last year, Acosta was briefly banned from the White House after he engaged in a contentious back-and-forth with Trump during a Nov. 7 press conference. During one now-infamous moment, Acosta refused to pass the microphone to a female White House aide.

“It would behoove CNN to remove Acosta as a beat reporter from the White House and instead simply label him as a commentator or analyst."

To coincide with Acosta being allowed to return to the White House, Press Secretary Sarah Sanders implemented a series of rules to govern White House press conferences going forward.

The new rules didn’t stop Acosta’s antics as he has sparred with Sanders and clashed with angel moms in recent memory.CNN did not respond to multiple requests for comment.