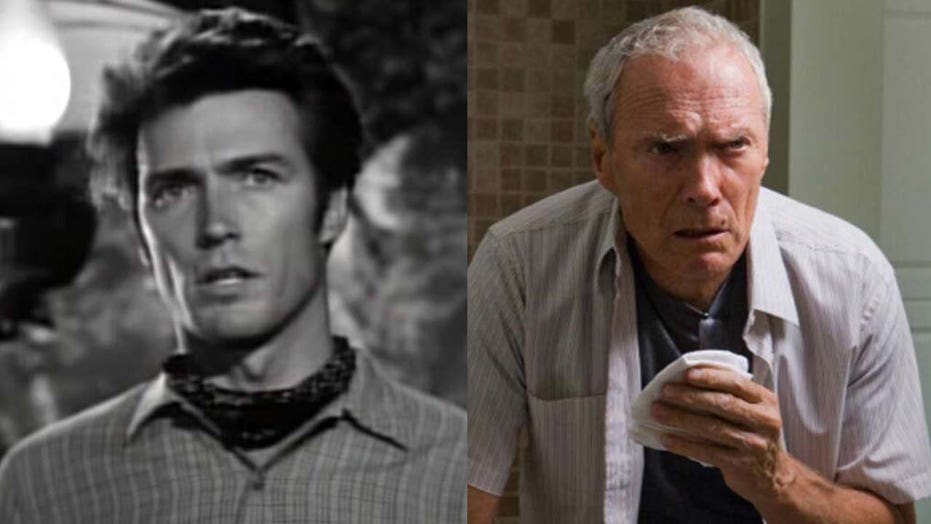 At 90, Eastwood has remained an icon and a fixture within Hollywood -- especially in Westerns -- first appearing on screen in 1955 and most recently directing and producing 2019's "Richard Jewell."

He's also won several awards, having earned four Oscars and a handful of Golden Globes throughout his decades-long career for his work both in front of and behind the camera.

With 90 years and 71 of those acting, 50 of them producing and 41 directing credits to his name, here's a look back at Eastwood's biggest on-screen roles:

One of Eastwood's earliest roles came in the form of Rowdy Yates, an assistant to a cattle drive trail boss Gil Favor.

Eastwood's character was young and reckless, and sometimes mouthy, resulting in Favor keeping a close eye on him.

The series follows the pair in their adventures as drovers of a cattle drive and the various characters they met along the way.

Clint Eastwood in 'A Fistful of Dollars.' (Metro-Goldwyn-Mayer Studios Inc.)

Eastwood scored one of his first leading roles with 1964's "A Fistful of Dollars."

The film follows "the man with no name" -- officially credited as Joe -- as he pits two warring families against each other as a way to make money.

Along the way, Joe discovers a woman being held prisoner by one of the families, and his efforts to release her spin the feud out of control.

HENRY CAVILL IN TALKS TO REPRISE HIS ROLE AS SUPERMAN IN A NEW DC PROJECT FROM WARNER BROS.

Clint Eastwood in 'Play Misty for Me.' (Universal Pictures)

Eastwood fans know that the titan isn't known only for his acting, but also his work behind the camera as a director and producer.

"Play Misty for Me" served as Eastwood's first time directing -- which he would continue to do 40 more times.

ANTHONY JAMES, 'UNFORGIVEN' AND 'IN THE HEAT OF THE NIGHT' ACTOR, DEAD AT 77

The movie followed Eastwood's Dave, a poetic disc jockey involved in a relationship with a woman who quickly becomes obsessive. Things escalate after the breakup, needless to say.

The first of a five-film franchise, "Dirty Harry" chronicles the story of Inspector Harry "Dirty" Callahan as he tracks a vicious murderer.

The murderer, who shares similarities with the real-life Zodiac Killer, is called Scorpio and is tracked by Dirty and his rookie partner Chico.

Unfortunately, Dirty's hotheadedness costs him evidence in the case against the killer, who is released from custody to create chaos again until Dirty can finally finish things once and for all.

"Dirty Harry" was followed by "Magnum Force," "The Enforcer," "Sudden Impact" and "The Dead Pool," all following Dirty as he takes the law into his own hands.

While Eastwood's career had often found critical success, it wasn't until "Unforgiven" that he earned the industry's highest honor: an Oscar.

In fact, he won two: one for best director and another for best picture, having served as a producer on the film. As if that weren't enough, Eastwood was also nominated for an Oscar for his performance in the movie as Bill Munny.

"Unforgiven" tells the story of Munny, a retired gunslinger who takes one last job after having lived as a farmer for years.

Munny teams up with Morgan Freeman's Ned Logan and the "Schofield Kid" to take down two cowboys that maimed a prostitute.

Another critical darling, "Million Dollar Baby" earned Eastwood two more Oscars in the same categories as "Unforgiven," as well as another nomination for acting.

In the film, Eastwood plays Frankie, an old curmudgeon of a gym owner who is convinced to help train Maggie, an amateur boxer.

Maggie begins to find success until an injury leaves her unable to box, sending Frankie into a spiral

Hilary Swank and Morgan Freeman both won Oscars for their parts in the film.

Eastwood stars in "Gran Torino" as Walt, a lonely and bitter Korean War veteran living in an area rife with gang violence.

When Walt's neighbor Thao is charged with stealing Walt's Ford Gran Torino as part of an initiation to a gang, and fails, the gang begins to beat him until Walt shows up to defend Thao with a rifle.

Walt develops a bond with Thao, prompting the two to team up to avenge the rape and beating of Thao's sister.

Interestingly, the film earned Eastwood a Golden Globe nomination for best original song, having co-written the song "Gran Torino" for the film's soundtrack.