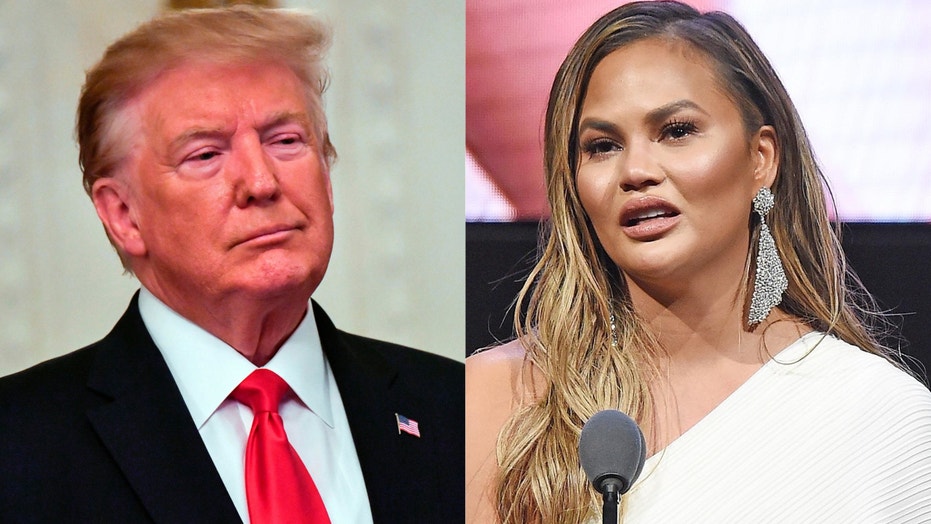 Chrissy Teigen has no regrets about her response to President Trump when he called her John Legend's "filthy mouthed wife."

In a sitdown with Ellen DeGeneres airing Wednesday, the comedian showed Teigen's response to the commander in chief, in which the model called him a "p—y a— b—h" for not tagging her in his tweets about her and Legend's alleged silence on his crime reform measures.

"My heart stopped because at that moment you know that you're about to get just the wildest group of people ever," Teigen, 33, admitted of Trump's tweet about her and the Grammy winner.

"He just went in — he called John a 'boring musician' and his 'filthy mouthed wife.' Which, those two things are true," she said. "John is boring, I do have a filthy mouth."

Teigen said she and Legend went back-and-forth debating how to respond to POTUS because they were both amused and angry.

Trump wasn't happy that Legend and Teigen were “talking now about how great” crime reform is but allegedly didn't act on the reforms when Trump says that it mattered. Trump signed the First Step Act into law last year, reducing mandatory minimum sentences in certain instances and giving judges more discretion in individual cases. More than 3,100 inmates will be released under the act, which has been praised by both Republicans and Democrats.

Trump talked about criminal justice reform and how President “Obama couldn’t come close” to passing meaningful law. The president said he is tired of “boring musician John Legend” and his wife for touting the bill, which Legend discussed in a CNN special.

Donald Trump and Chrissy Teigen have feuded on Twitter for years. He blocked the model previously and recently called her John Legend's "filthy mouthed wife." (Getty)

"They only talk about the minor players, or people that had nothing to do with it...And the people that so desperately sought my help when everyone else had failed, all they talk about now is Impeaching President Trump," Trump lamented.

Teigen mocked the president, calling him a “p—y a— b—h” for tagging “everyone” but her in his tweet. Legend sarcastically requested that followers not retweet Teigen's insult as a hashtag.