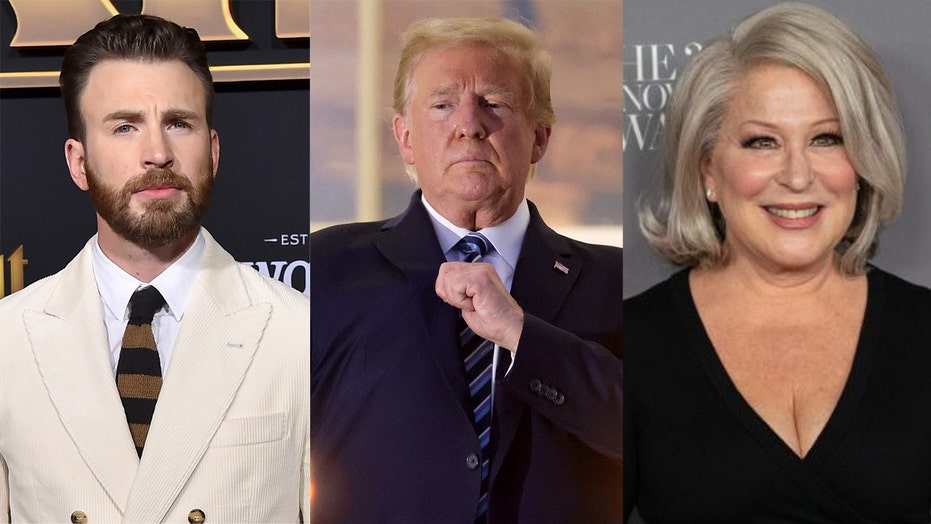 Many stars and high-profile figures have contracted coronavirus since the beginning of the outbreak, but few fights against the virus have been as closely watched as President Trump's.

Trump, 74, announced on Thursday that he and Melania Trump both tested positive for the virus and he subsequently spent several days at Walter Reed Medical Center.

While there has been some variation in the reports on the president's health, it is understood that he had a fever and his blood oxygen levels dropped at least twice, though he is now back in the White House.

On Monday, Trump announced on Twitter that he'd be leaving Walter Reed Medical Center, writing "don’t be afraid of Covid. Don’t let it dominate your life."

The comment caused a stir in the showbiz community and several stars took to social media to express their frustration over the President's sentiment.

"Don’t be afraid of Covid?! You’ve been under round-the-clock care by the best doctors using the best drugs," wrote Marvel star Chris Evans. "Do you really think everyone has access to that?! Sadly, I’m sure you’re aware of that disparity, you just don’t care This is reckless to a shocking degree, even for you."

"You don’t have covid for the weekend," said Zach Braff, a close friend of the late actor Nick Cordero, who died from complications caused by COVID-19 earlier this year. "He either has it and doesn’t give a f--k who gets it from him, or he never had it."

"The sick #IdiotInChief just tweeted that 'I never felt better in 20 years. Don’t be afraid of getting COVID!' TELL THAT TO THE DEAD!" wrote Bette Midler. "Must be pumped up from steroids & getting medications no one else in the world can get. He shoulda said '#ImHighAsAKite' #Base, go get Covid!"

In a later tweet, the singer called Trump a "jacka--" and accused him of  "destroying my country on purpose."

"'Don’t be afraid of Covid' he dares say to those of us who have lost loved ones to Covid," wrote director Ava Duvernay. "This man is evil."

"This Is Us" star Mandy Moore also joined the chorus of critics.

"Don’t be afraid of covid? Tell that to the 210,000 families who have lost loved ones. To the Black, Brown and Indigenous folks disproportionately affected," she tweeted. "With tens of millions of jobs lost and the economy tanked. Many of us isolated for months. You’re the cruelest. #votehimout."

CELEBRITIES REACT TO TRUMP ANNOUNCING HE'S HALTING WHO FUNDING: 'THERE ARE NO WORDS'

"'Don’t be afraid of Covid' America!" said actor Josh Gad. "With a helicopter at your disposal and access to treatments only a President can get, you too will get [through] this just fine in time to get back to your state of the art in-house medical facility with 24 hour care and the best doctors around!"

"'Don’t be afraid of Covid.' How preposterous!" wrote Barbra Streisand. "210,000 American people have lost their lives! Children have lost their parents. Mothers and fathers are gone! How dare he say such a stupid thing."

Padma Lakshmi found a tweet from Trump published in 2014 in which he accused a doctor that treated ebola of exposing others in public, calling him "a very SELFISH man."

On Monday, she retweeted the message and offered a response: "Like when you were exposed to COVID-19, got it & went to a fundraiser without telling anyone, posed for photos, met w/ soldiers, rode around w/ secret service & then said 'don't be afraid of COVID' while pumped up w/ exclusive experimental treatments from your hospital stay?"

"This is the equivalent of spitting on the graves of the 207,000 Americans who passed away from COVID, whose families had to say goodbye to them over speakerphone & weren't even able to have comfort during their time of grief," she said in response.

"Idiot super spreader the best medical care in the world tells millions with virus, and the relatives of over 200,000 dead victims: dont be afraid of covid. Don’t let it dominate your life," he tweeted.