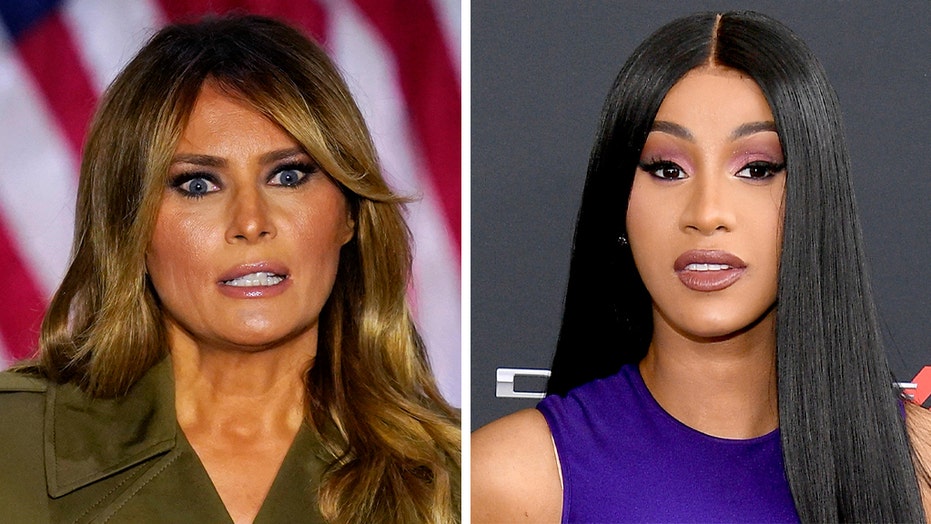 Cardi B is not holding back.

On Tuesday, first lady Melania Trump took the stage at the Republican National Convention as one of the evening's headliners.

Melania, 50, received praise from fans after her speech, including writer DeAnna Lorraine, who shared her support on Twitter.

CARDI B CLAPS BACK AT CRITICS OF HIT SONG 'WAP': 'IT'S FOR ADULTS'

"America needs far more women like Melania Trump and far less like Cardi B," wrote the author, whose comment didn't go unnoticed by the 27-year-old rapper.

Cardi B, who recently spoke with Joe Biden for an exclusive interview right before the Democratic National Convention, responded to the tweet with a question: "Didn’t she used to sell that Wap?"

Her comment was in reference to her hit song "WAP," which has received criticism from listeners for its sexual explicitly. The title of the song is an acronym for "wet a-- p---y."

About 30 minutes later, Cardi B responded again, this time, sharing a throwback semi-nude photo of Melania from her days as a former fashion model.

The "Bodak Yellow" rapper has been very vocal about her interest in politics of late, often throwing her support behind candidates such as Bernie Sanders and Biden while offering up criticism of Republicans.

Cardi B (left) and Megan Thee Stallion in the music video for 'WAP.' The song has been criticized for its explicit lyrics. (Atlantic Records)

Cardi B's tweets were made during controversy over her new song, with the star recently defending it.

"The people that the song bothers are usually conservatives or really religious, fake religious people," the rapper said on the "Kyle & Jakie O" radio show, according to the Daily Mail.

She went on to explain that she didn't see the song's expletives as out of line for the hip-hop industry, and explained that the song is "for adults" rather than children.