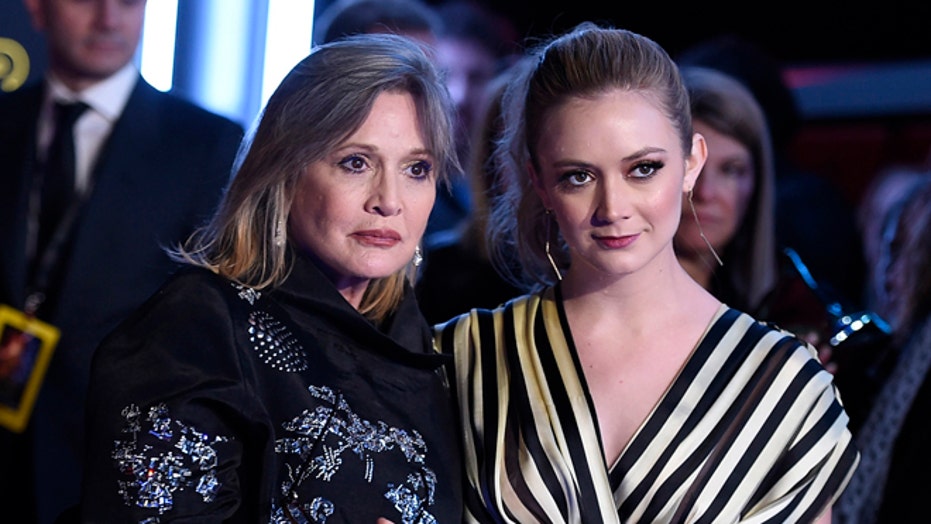 Luke Skywalker's lightsaber now yours to own

Top Talkers: Classic 'Star Wars' props are up for auction, including an original pair of C-3PO gloves and a Stormtrooper helmet from 'The Force Awakens.'

"Star Wars: The Rise of Skywalker" director J.J. Abrams confirmed the pair will share a scene together in the film.

In an interview published on Wednesday, Abrams told Vanity Fair, “It was a bizarre kind of left side/right side of the brain sort of Venn diagram thing, of figuring out how to create the puzzle based on the pieces we had."

The movie is using unused extra footage of Fisher from when she filmed what would become her last appearance in the 2015 installment "The Force Awakens." Abrams said that initially, he wrote Lourd out of the scenes, but she insisted on being in them.

He explained that Lourd said, “I want to be in scenes with her. I want it for my children when I have kids. I want them to see.”

And thanks to expert editing and a little movie magic it's like Fisher’s Princess Leia never left us.

"There are moments in this movie where Carrie is there, and I really do feel there is an element of the uncanny, spiritual, you know, classic Carrie, that it would have happened this way, because somehow it worked. And I never thought it would," Abrams admitted.

He said that Lourd was the utmost professional but there were times when she would have to take a moment to collect herself. "I know it was hard for her," he recalled.

Fisher passed away in December 2016 at 60 years old after suffering cardiac arrest.