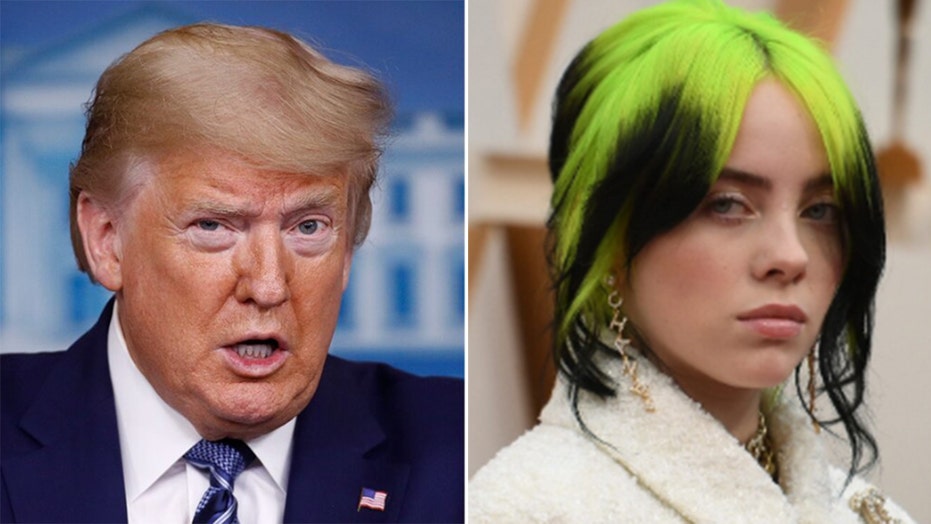 Billie Eilish is the latest celebrity to pile on President Donald Trump for his tweets about protesters in Minneapolis, Minn. following the death of George Floyd.

The 18-year-old hitmaker tore into Trump for referring to protesters as "thugs" and for glorifying violence in tweets he wrote earlier in the week.

"ARE YOU DEAD F--KING SERIUS?????" Eilish wrote on her Instagram story.

Billie Eilish arrives at the Oscars on Sunday, Feb. 9, 2020, at the Dolby Theatre in Los Angeles. (AP)

The singer's comments were written over screenshots of two tweets Trump wrote on Thursday.

He wrote: "I can't stand back & watch this happen to a great American City, Minneapolis. A total lack of leadership. Either the very weak Radical Left Mayor, Jacob Frey, get his act together and bring the City under control, or I will send in the National Guard & get the job done right.....These THUGS are dishonoring the memory of George Floyd, and I won't let that happen. Just spoke to Governor Tim Walz and told him that the Military is with him all the way. Any difficulty and we will assume control but, when the looting starts, the shooting starts. Thank you!"

Eilish's anger and frustration continued into Saturday morning, as she posted a lengthy rant against white people who have reacted to Floyd's death by declaring "all lives matter." She admitted that while she tries to address situations like this "delicately" due to her massive following, she decided she would no longer stay silent.

Protesters rally as they march through the streets on May 29 in St Louis, Missouri. (Getty)

She argued that now is the time for white Americans to stand up for the black community.

Eilish went on to question that, if "all lives matter," why are innocent black people being killed just for the color of their skin. She also questioned why white people are "given opportunities that people of other races aren't?" The answer, she said, is "white privilege."

She concluded her post by writing "BLACK LIVES MATTER" multiple times, begging her millions of followers to "say it again" with the hashtag #justiceforgeorgefloyd.

Floyd was a 46-year-old black man who died in police custody on Monday after a white Minneapolis police officer responding to a call kept kneeling on his neck. In a now-viral video, Floyd can be heard telling the cop, "I can't breathe."

The four officers involved in the incident have been fired and Derek Chauvin, the officer who had his knee on Floyd's neck, was taken into custody on Friday and charged with third-degree murder and manslaughter.

1,700 NATIONAL GUARDSMEN EXPECTED IN MINNEAPOLIS TONIGHT; MILITARY POLICE ON ALERT AFTER RIOTS RAGE ACROSS US

Eilish's outburst follows a number of other A-list stars who refuse to stay silent. Taylor Swift, 30, also bashed Trump for his controversial comments this week, writing, "After stoking the fires of white supremacy and racism your entire presidency, you have the nerve to feign moral superiority before threatening violence? ‘When the looting starts the shooting starts’??? We will vote you out in November.@realdonaldtrump."

Swift's tweet was liked 1.8 million times and racked up nearly 400,000 retweets as of Saturday morning. Other stars who have used their public platforms to mourn Floyd's death and bash police brutality in America included rapper Cardi B, who declared "enough is enough," Justin Bieber, who added, "THIS MUST STOP" and Kylie Jenner, who called the video of Floyd's death "the most devastating and completely heartbreaking" she's seen.

Floyd's death continues to ignite violent protests all over the country, including the Minneapolis Police Department's Third Precinct being set ablaze by rioters on Thursday.