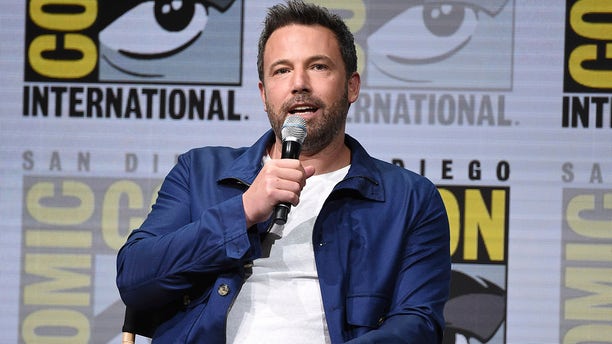 Ben Affleck is still Batman. The actor shot down rumors that he would be hanging up his cape for the stand-alone Batman film, even though he recently ceded directing responsibilities.

Speaking to a crowd of about 6,500 fans at San Diego Comic-Con, Affleck unequivocally assured the crowd that he is still starring in "The Batman."

On Friday, the trade publication The Hollywood Reporter published a report that Warner Bros. was working on plans to "usher out Affleck's Batman gracefully" and suggested that it might happen before "The Batman." The report threatened to overshadow Warner Bros.' flashy Hall H presentation on Saturday, which was focused on hyping the studio's big superhero mashup film "Justice League," which hits theaters in November.

"Let me be very clear. I am the luckiest guy in the world. Batman is the coolest part in any universe, DC or Marvel," Affleck said. He wanted to knock down the idea that he wasn't committed to the character, even though he won't be directing.

Affleck praised director Matt Reeves' vision and said he would "be an ape on the ground for Matt Reeves." Reeves recently directed "War for the Planet of the Apes."

With the cloud lifted, Affleck and his fellow "Justice League " stars Gal Gadot, Jason Momoa, Ezra Miller and Ray Fisher were left to talk about the upcoming film, which has had its own fair share of upheaval recently when director Zack Snyder exited for personal reasons and Joss Whedon took over the reshoots and completion of the film.

Neither Snyder nor Whedon were at Comic-Con, although Snyder tweeted Friday that he was sending his best to the "Justice League" team.

The footage focused heavily on Gal Gadot's Wonder Woman, who emerged as the clear favorite of the fans in the audience who screamed at every shot of the Amazonian warrior. "Wonder Woman" recently became the highest grossing of the four DC Extended Universe films.

Another person missing from the panel was Superman star Henry Cavill. When a young fan asked the actors if he'll show up in the film, Gadot reassured him. "We can't say much but if you love Superman you're going to be very, very happy," she said.

Warner Bros. also teased a bit of "Aquaman," out Dec, 2018, starring Momoa in the title role. A snippet of footage from the James Wan-directed film, showed fishermen who are quite surprised when something under the water catches on to the hook and starts dragging the boat along. They look underwater to see a fleet of giant ships coasting under the surface.

Momoa also teased that Ocean Master would be the film's main villain, though he laughed that he would likely get in trouble for it.

The studio didn't go past the 2018 slate of films, however.