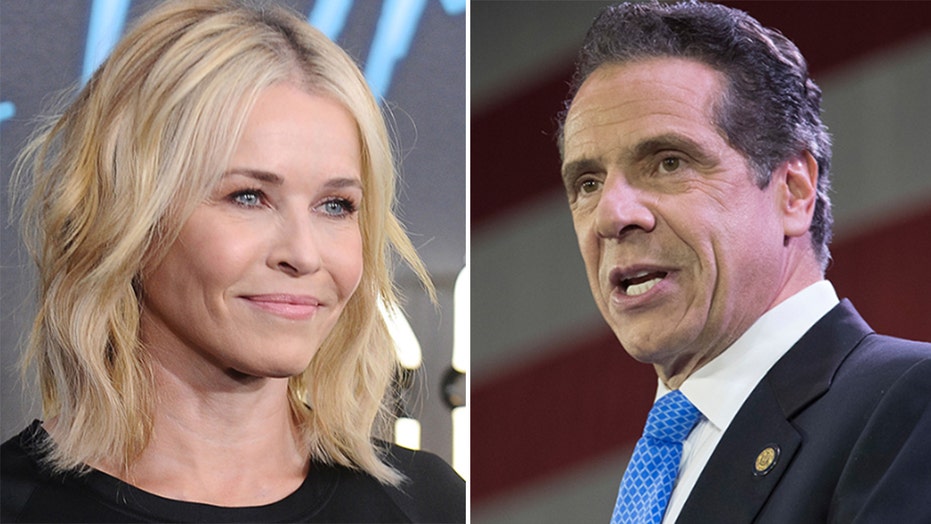 New York Gov. Andrew Cuomo is responding to Chelsea Handler's crush on him.

On Thursday, Cuomo made an appearance on "The View" where he was speaking about COVID-19. Additionally, he was asked about Handler's infatuation with him as well as her joke that she wants to "flatten [his] curve" and she wants him "to flatten [her] curve."

"I've had a lot of conversations about flattening the curve, but never quite that way," Cuomo said with a laugh. "I'm a big fan of Chelsea and she is great. We have fun."

He continued: "But on my dating life, you know, I am only dating, at this point, in-state residents. I'm dating New York residents. So if Chelsea changes her residence, then maybe we can work it out."

CHELSEA HANDLER SAYS GOV. ANDREW CUOMO GHOSTED HER AFTER AGREEING TO A DATE

Handler appeared on 'The View' earlier this week where the hosts asked the comedian about her crush on the politician.  (Getty/AP)

Earlier this week, Handler also appeared on "The View," where the hosts asked her about her crush, noting that Cuomo would be appearing on the show later this week.

“First of all, he’s like a big giant. He came in like the Incredible Hulk,” she said. “We needed somebody to come on the scene, we were so dehydrated for real leadership that when he came on the scene looking like this big Italian hunk, he was like ‘wear a mask.’ I was like ‘I’ll wear a mask, I’ll put a mask on every part of my body. I wanna flatten your curve and you can flatten my curve and then we can both apex together.”

CHELSEA HANDLER SAYS 50 CENT WAS 'SCREWING AROUND' WHEN HE DECLARED SUPPORT FOR TRUMP, NOW BACKS BIDEN

She then noted that she wanted the ladies of “The View” to ask him a question on her behalf when he shows up. She explained that she previously asked him out on a date but he never followed up.

“I do want you to follow up on something with him for me ladies if you wouldn’t mind,” she said. “I did have a conversation with Cuomo a few months ago and I did ask him out on a date and he did say ‘yes’ and then I never heard from him.”

The hosts promised to question Cuomo on that before pivoting the conversation to her comedy special, "Evolution."

The 45-year-old comedian also discussed her newfound crush on Cuomo for his handling of the coronavirus pandemic in her new HBO Max original comedy special, in which she discussed liking older men, specifically the 62-year-old politician.