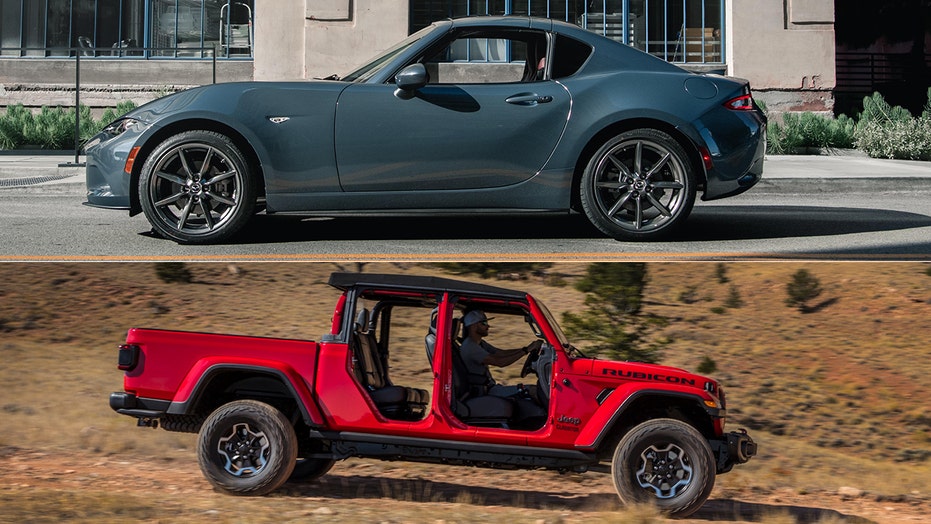 The 2021 Jeep Wrangler Rubicon 392 is the most powerful Wrangler ever. Fox News Autos Editor Gary Gastelu took the V8-powered truck to the Monticello Motor Club to see what it can do.

Consumer Reports has released its Top 10 lists of worst vehicles for short and tall drivers among those recently tested, and four models managed to end up on both.

The Miata and Gladiator both offer open-top driving. (Mazda/Jeep)

The Mazda MX-5 Miata and Toyota Tacoma, along with the similar Jeep Wrangler and Gladiator, were all found to be subpar for tiny and towering people after being evaluated by CR’s staff, which range from 5 feet, 1 inch to 6 feet, 2 inches in height.

CR writer Mike Quincy tells Fox News Autos the cars are scored on a variety of factors that include ease of entry, visibility and comfort.

Quincy said all of the vehicles suffered from a lack of seating adjustments, while the Mazda is difficult to climb down into and the trucks are hard to enter, even when equipped with factory sidesteps, which are mounted higher and closer to the body than ideal.

Ironically, the Miata, Wrangler and Gladiator can all be driven with open roofs providing an infinite amount of headroom for the tallest occupants.

As far as what tall and short drivers might want to keep an eye out for is concerned, here are CR’s Top 10 best lists: