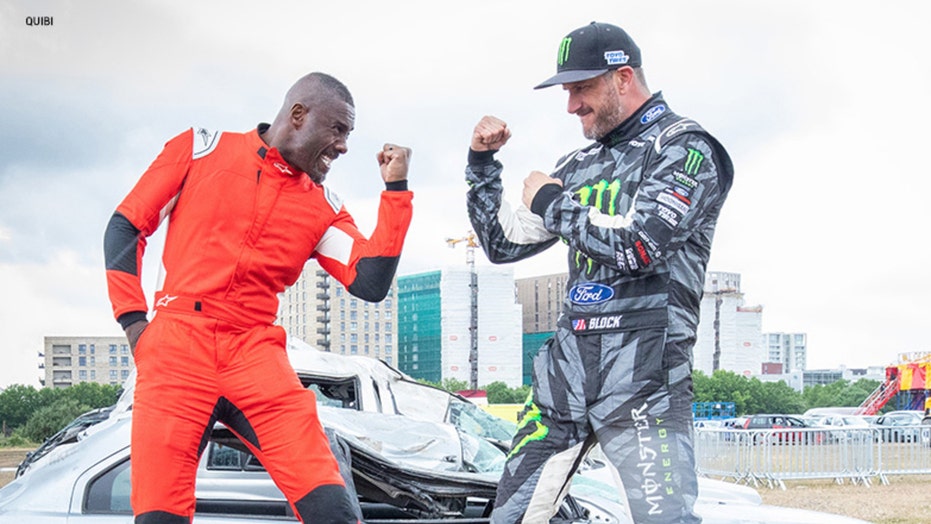 The superstar and stunt driver star in the Quibi show Elba vs. Block, where they face off in a series of crazy car challenges on the new short-form video platform.

Idris Elba has starred in plenty of action films, but he’s had his fair share of excitement in the real world, too.

The Hollywood star, who was recently diagnosed with COVID-19, is a certified car nut who’s hosted several automotive shows and set the U.K. record for the Flying Mile in a car at 174.8 mph in 2015. But while he’s proven that he can drive fast in a straight line, how good is he around, say, an obstacle course that’s on fire?

That’s one of the challenges he’s facing in the new show “Elba vs. Block” on the short-form video platform Quibi, which pits him against pro rally and stunt driver Ken Block across eight episodes that test their skills in a variety of ways that include jumping over a row of cars while towing a camper and taking on the Wall of Death.

“He’s actually quite good, and he’s good at applying himself,” Block said of his on-screen rival, adding that, “I think what he’s lacking, though, is experience.”

“He didn’t approach things the same way that I did, but he still did quite a good job. It was quite a challenge for me. It wasn’t easy for me to go out and try and beat him.”

Block is best known for his viral Gymkhana videos, where he drifts and jumps rally cars through scenic venues, including the streets of San Francisco, but he said the new show is one of the first he’s done where personality plays a role.

Despite his background designing wild rides, Block said he wasn’t involved in planning the stunts for the show, which means he didn’t have an advantage over his less-experienced opponent.

A running score is kept across the season’s eight episodes, and while Block won’t spoil who wins, he said “Idris does give me a run for my money.”

Watch the exclusive video above for more on the show and to hear what Block is making the best of things at his Utah home during the coronavirus crisis: