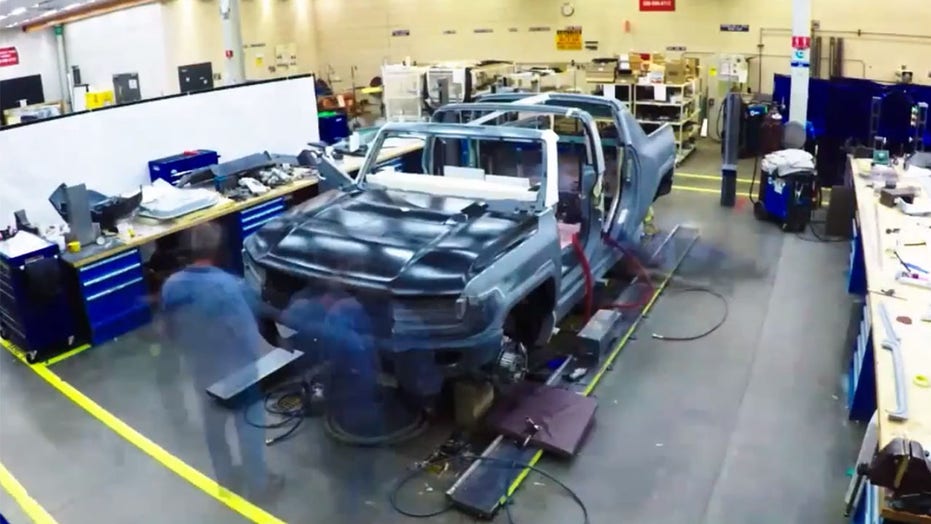 General Motors is calling its upcoming GMC Hummer EV “The World’s First Supertruck” and on paper, it sounds like it could be.

The battery-powered off-roader, which the company has teased with shadowy images, will be offered as a pickup or SUV and feature GM’s hands-off Super Cruise driver aid, Tesla-beating 350 kW charging capability and a model with 1,000 hp that can accelerate to 60 mph in three seconds.

It also has an Adrenaline Mode, which likely goes along with its maximum performance, but also something called Crab Mode that's more of a mystery.

GMC hasn’t elaborated at all about what it is. Ford demonstrated the front trunk of its electric Mustang Mach-E by filling it with shrimp, but while the Hummer EV also has a so-called “frunk,” we’re pretty sure Crab Mode is something completely different.

The HUMMER EV features a front trunk storage compartment with an electric motor tucked underneath it. (GMC)

One clue may come from a military truck called the Scarabée designed by Volvo Group-owned military vehicle manufacturer Arquus.

The light armored vehicle features four-wheel steering that allows it to move diagonally when they’re all pointed in the same direction, which the company refers to as a “crab” motion, although it's not capable of going perfectly sideways like the crustacean.

Pointing the front and rear wheels in opposite directions allows the behemoth to make tighter turns than would be possible with a conventional setup. While they are primarily intended to help the Scarabée maneuver in tactical situations, both features could come in handy on tight off-road trails, not to mention while parking.

GMC has not confirmed that the Hummer EV will have rear-steering capability, but it wouldn’t be a first for the brand. From 2002 to 2005 the GMC Sierra pickup was available with an option called Quadrasteer that wasn’t able to ‘crab’, but did allow the full-size truck to turn as sharply as a Saturn coupe.

A prototype for a GM modular electric truck platform that is likely indicative of the one that will underpin the HUMMER EV features a fully independent suspension system. (GM)

Startup electric truck company Rivian's pickup uses four electric motors that allow it to perform a "tank turn" in place by powering them in opposite directions, but it can't move sideways ... as far as we know.

Further details on the GMC Hummer EV will be released in the coming months ahead of its full reveal sometime this fall, when the order books will open for deliveries scheduled to begin in late 2021. One thing is for certain, however: GMC's "supertruck" shouldn't have any trouble hauling a bushel of crabs home from the fish market.

Either in the bed or the frunk.