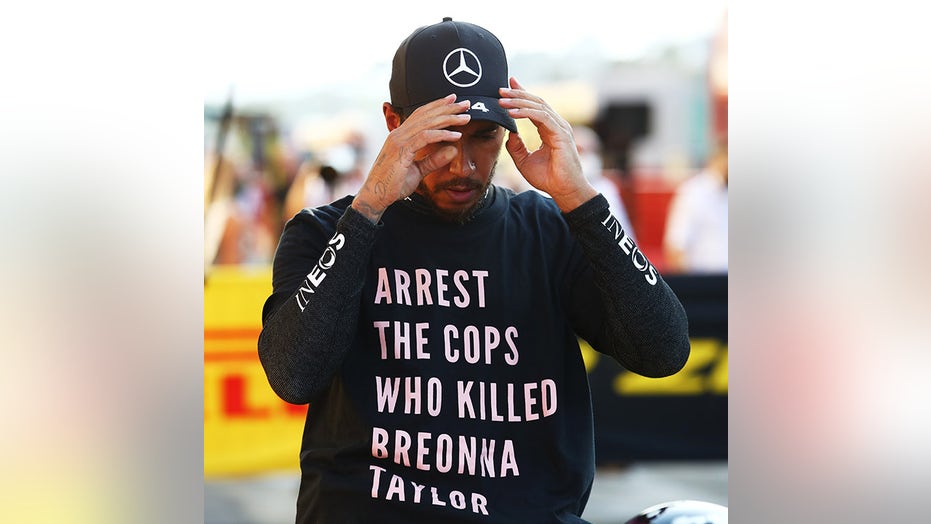 Kenneth Walker, the boyfriend of Breonna Taylor the essential worker who was killed in her home by police, is suing the city of Louisville and the Louisville police department for assault, battery, false arrest and imprisonment,&nbsp;and malicious prosecution.

Six-time Formula One champion Lewis Hamilton is under investigation by the sport’s governing body for possible rules violations after he wore a T-shirt with the message “Arrest the cops who killed Breonna Taylor” at the Tuscan Grand Prix on Sunday.

Hamilton, who is the only Black driver in the series, wore the shirt as he took a knee before the race and again on the podium after winning it. The back of it featured the phrase “say her name” and an image of Taylor, who was shot and killed when police entered her home while executing a “no-knock” search warrant on March 13 as part of a drug investigation.

"It took me a long time to get that shirt and I've been wanting to wear that and bring awareness to the fact that there's people that have been killed on the street and there's someone that got killed in her own house, and they're in the wrong house, and those guys are still walking free,” Hamilton said after the race.

The FIA is considering if the shirt violated restrictions displays of political statements or gestures in the series, Sky Sports reported.

The Mercedes-AMG F1 driver later in the day posted to Twitter: “It’s been 6 months since Breonna Taylor was murdered by policemen, in her own home. Still no justice has been served. We won’t stay silent.”

In June, Hamilton called retired F1 drivers Mario Andretti and Jackie Stewart "ignorant" in regard to comments they had made about racism in the series.