Darrell Wallace Jr. to drive for Richard Petty in 2018 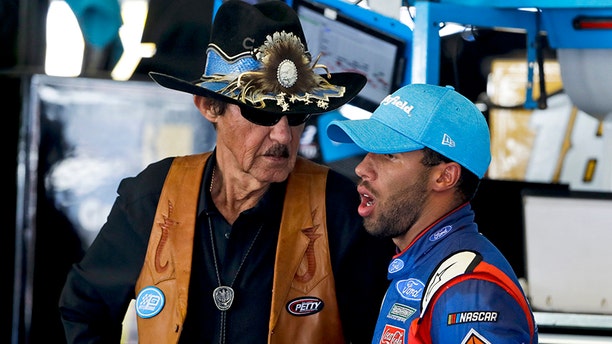 Darrell Wallace Jr. will become the first black full-time driver at NASCAR's top level since 1971 when he takes over Richard Petty's iconic ride next season.

The 24-year-old Wallace, more commonly referred to by his nickname of "Bubba," became the first black driver to race at NASCAR's top level since 2006 when he replaced an injured Aric Almirola earlier this year. At the time, Petty recalled, he wasn't sure he wanted Wallace as a replacement.

"We went round and round when Aric got hurt about who we was going to put in the car," Petty said Wednesday. "Bubba had been running some races and stuff. He was bad about wrecking, I thought, so we had to have a little talk with him, say, 'You know, just go out and finish the races and stuff.'"

In other words, race wasn't an issue.

"That was the least of my considerations," Petty said. "We looked at the talent. We looked at how we thought he handled the fans, how he handled the press, how he handled sponsor deals, all this kind of stuff. I didn't care what color he was, where he come from, any of that. If you look back at the Petty history and stuff, we've had a driver from Brazil that drove for us for a while, one from Mexico that drove a Truck race for us. It's not anything different than what we've done before."

Petty, a seven-time champion and Hall of Famer, recently made headlines for saying he would fire any Richard Petty Motorsport employee who kneeled during the national anthem. Such displays have become a familiar sight at NFL games as African-American players kneel to protest social injustices.

Wallace, an Alabama native and graduate of NASCAR's diversity program, has tried not to make race part of his climb through the ranks.

He won the Truck Series race at Martinsville in 2013 to become the first black driver to win at a national NASCAR series event since Wendell Scott in 1963. NASCAR says there have been at least seven black drivers in its series previous to Wallace, including Scott, who raced from 1961-73 in Cup, Willy T. Ribbs, who did three Cup races in 1986, and Bill Lester, who raced sporadically from 1999 until 2007 at all three national levels.

"There's been a lot of people who have come up through the ranks and tried to carry on the legacy that Wendell Scott had laid down for us," Wallace said. "For me to step in that realm and take on that role, there's a lot of pressure.

"But we're going to go out there and just continue to do what we do on and off the racetrack, that's to represent the brand of myself and Richard Petty and his image the best way I can, continue to grow together."

Wallace stressed that patience has been critical in his slow move up toward Cup, but that his climb hasn't been much different than current Cup newcomers Ryan Blaney, Chase Elliott, Corey LaJoie, and Austin and Ty Dillon.

"Everybody has different ways of getting to the level that I can now say that I'm at," he said. "Seeing my buddies that are in the Cup level now ... we all raced together. We were all 10, 11, 12 years old running against each other here at Charlotte Motor Speedway, beating and banging with each other. Now we're at the top level. Each and every one of us have a different story of how we've gotten there."

The team did not immediately disclose a car manufacturer or sponsor in Wednesday's announcement. The team currently uses Fords in an alliance with Roush Fenway Racing.